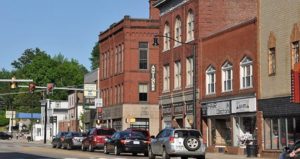 The City of Franklin is a small city with land area of about 27.7 square miles, located in Merrimack County, NH. The city has approximately 8,500 residents, and more than two-thirds of its tax base is dependent on property taxes. The city applied for a loan from the Community Development Finance Authority to convert all its street lighting from sodium to LED, as part of its “Franklin Goes Green” initiative to become more energy efficient and improve the experience of commuting after sunset for residents, businesses and visitors.

The residents of the City of Franklin have an average per capita income of $21,700 and more than a fifth of its residents live below the poverty line. The city has a relatively high unemployment rate of 5.7 percent. In 2015, the city was cash-strapped and unable to implement a number of projects that would be beneficial to its residents.

The City of Franklin was approved for a loan of $165,200 through the Clean Energy Fund’s Municipal Energy Reduction Fund (MERF) in August, 2015. Thanks to the financial assistance provided by the Clean Energy Fund, the company was able to leverage another $49,800 from the New Hampshire Public Utilities Commission in rebates. Through the project the city converted nearly 500 street lights from sodium to LED bulbs.

Administrators of the City of Franklin have dubbed the LED streetlight project as a huge success. Since the lights were installed, the city has never had to call its utilities provider to replace a burnt out street light. The loan from CDFA’s Clean Energy Fund is structured in such a way that its annual energy savings – which are estimated to be $31,000 – are greater than annual loan payments. Thus, the city is cash flow positive from the get go and will be able to access additional resources for other projects. The loan will be paid off entirely in six years. Residents of the city are not only happy that they have been able to cut its streetlights bill in half, but also appreciate the increased quality of lighting.